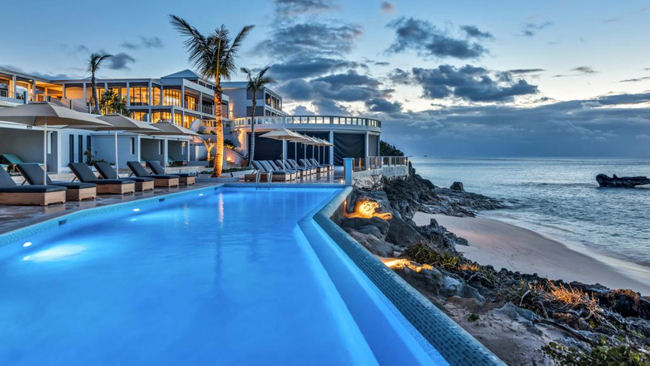 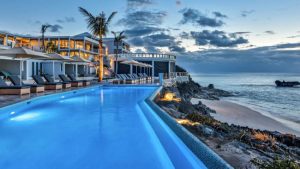 For the first time in 45 years, there is a new hotel lining the stunning ocean-front of Bermuda. Introducing The Loren at Pink Beach, which features 45 suites, a full spa and exceptional service.

The elegant retreat is setting a new standard for service and design in Bermuda. Introduced in February, The Loren opened officially on Saturday, April 29, just four weeks prior to the start of the 35th America’s Cup, which kicked off on the Great Sound of Bermuda on May 26.

Developed by former investment banker and hedge fund principal Stephen King, The Loren is located on eight acres of magnificent coastal landscape that was formerly occupied by the Pink Beach Club. Set on a quiet corner of Bermuda’s southern coast, the natural setting, with sweeping views of the deep cerulean waters of the Atlantic, remains unchanged.

A departure from the traditional architecture that is so prevalent on Bermuda, The Loren unfolds as a marvel of clean lines and elegance. Arriving guests are greeted not with a front desk, but with dramatic views of the ocean and a flood of natural light pouring through floor-to-ceiling windows throughout the lobby and dining areas.

Built using local materials, the design is at once bold and inviting. The hotel interior’s most dramatic feature is a glass spiral staircase off the lobby which invites guests to the dining spaces. Custom carpeting features abstract maps of Bermuda, off-setting the shades of blue and grey inside and out. King’s own world-class art collection including contemporary paintings, sculptures and works of mixed-media by artists such as Vik Muniz and Los Carpinteros. The collection adorns public spaces as well as guest rooms, suites and villas.

The Loren’s 45 well-appointed suites are spacious and warm, with breathtaking views of the Atlantic. The design merges sleek, modern lines with a warm colors and original artwork, creating comfortable living spaces. Suites have thoughtful touches including plush pillow-top beds, five-piece marble bathrooms with rain showers and Malin + Goetz bath products. The hotel’s outdoor space is no less dramatic, with two pools, four pool-side cabanas and an untouched stretch of signature Bermuda-pink sand beach for guests to use.

With two menus and a full in-room menu, The Loren’s culinary offerings are one-of-a-kind on Bermuda. Executive Chef Tim Sullivan of Great Performances, the premiere New York City food service and catering group, leads a talented culinary team in sourcing only the best, seasonal ingredients from local farms and fishermen to create refined, ever-changing menus. At The Loren, the culinary team puts significant time and energy outside of the kitchen into fashioning the dining experience with untraditional training methods, including assigned reading on the art of hospitality.

The culinary philosophy of The Loren is a stark departure from most on-island hotels and restaurants, which have long relied primarily on less-expensive – and often lower-quality – imported ingredients. Through relationships cultivated by Chef Sullivan with local farms, including Wadson’s and Tucker’s, the team builds the menus around Bermuda’s rich culinary resources. Chef Sullivan is involved in every aspect of sourcing food, and has identified the best local fisherman to provide fresh seafood. He is using these relationships to introduce guests to new ingredients and reinterpret classic traditional Bermudian dishes such as Fish Chowder.

Wellness at The Loren

With four treatment rooms, a hair salon and a full-range of custom treatments, The Spa at The Loren is a peaceful retreat for guests and locals. In addition to the Spa, the hotel will be rolling out a range of wellness offerings, including outdoor yoga and fresh juices.

Among many offerings on The Spa’s treatment menu is the Signature Loren Massage with highly relaxing and re-mineralizing techniques employed via warm hand carved Himalayan Pink Salt stones (60 minutes/$189, 90 minutes/$249). Many ingredients in the spa treatments, including the hibiscus, are sourced from Bermuda as well.

One thought on “Bermuda Welcomes First New Luxury Hotel in 45 Years, The Loren”