Across The Web The world’s most beautiful floral hotels 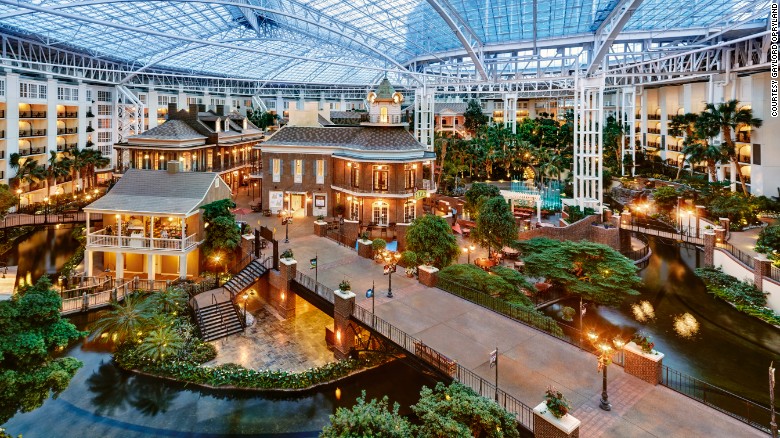 If spring is your favorite season, you don’t have to go outside to enjoy beautiful flowers. Just check into one of these hotels, from Mumbai to Manhattan to Monaco, for some of the world’s most elegant and opulent floral displays all year round. 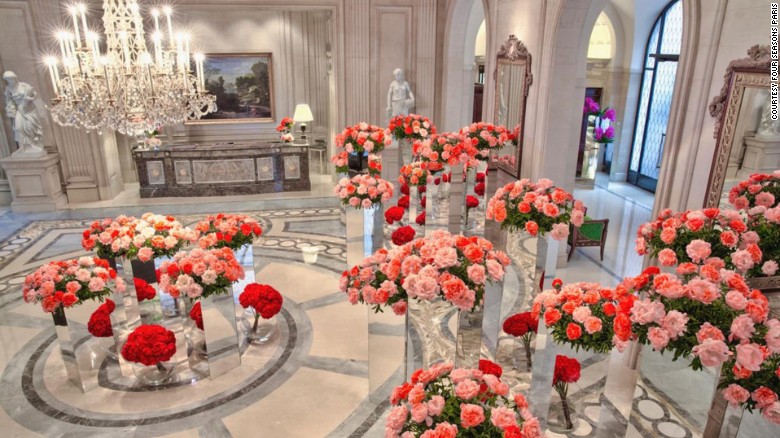 Jeff Leatham is to flowers what Simon Doonan is to window displays. The celeb florist has reigned over the Four Seasons in Paris for 16 years, where he works with a million-dollar budget to create works of art.
In between spearheading the hotel’s extravagant displays, Leatham’s client list is vast, from the Kardashians to Oprah Winfrey.
Despite his hectic schedule, lucky guests can score a (free!) two-hour workshop with him, dubbed The Jeff Leatham Experience, resulting in a bouquet with bragging rights. (Non-hotel guests can also partake for 200 euros.)
In a twist, Leatham is now splitting his time with the Four Seasons Hotel Los Angeles at Beverly Hills, where he’ll focus on more California-centric designs. He also has his own shop in the LA hotel.
But while he’ll spend most of his time in L.A., this doesn’t mean he’s saying adieu to Paris. He’ll still return to the George V for five days every month, so guests can continue to be wowed by the flower king.

As a Japanese-owned hotel, it makes sense that The Kitano would employ a resident ikebana expert to oversee floral arrangements. Ikebana is the ancient Japanese art of arranging flowers in a way that’s all about simplicity and balance.
Noritaka Noda, who learned the craft in Japan and the US, has been designing ikebana creations on a weekly basis for the hotel since 2014. If you can time your visit for March, odds are good that you can also admire his annual ikebana exhibit at the hotel, which this past year included 23 floral arrangements. (Yes, cherry blossoms were among them.)
While The Kitano doesn’t offer any ikebana classes, fear not. The hotel can arrange private classes with Noda himself, who also teaches at the Ikenobo Ikebana Society.

Mention the Netherlands, and tulips are one of the first things that spring to mind.
While you can undoubtedly find this unofficial national flower at many a Dutch hotel in spring, you’ll encounter 2,000 tulips at The Pulitzer’s spacious inner courtyard gardens, which were designed by the same landscape architect as the famed Rijksmuseum. The hotel’s florist, Season Flowers, has also filled the interior with colorful tulips that complement the décor.
Don’t worry if you miss prime tulip season, since the impressive displays are changed on a weekly basis and often highlight whatever’s in season.
Even better, the hotel offers a flower shop right off of the lobby, so you can fill your room with all the stems you desire. 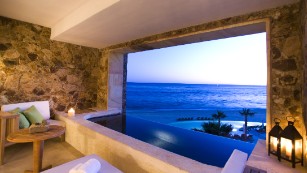 Las Vegas doesn’t do anything that’s subtle, and the Bellagio is no exception.
The hotel is home to the 14,000-square-foot Conservatory & Botanical Gardens, which undergo a massive transformation every season.
“Japanese Spring” is the current theme, with a 35-foot kabuki figure starring as the centerpiece.
It took a team of 120 horticulturists and designers to arrange the exhibit’s 80,000 flowers just so, including butterfly and turtle topiaries, a tea house and a Japanese temple.
The creation is the brainchild of designer Ed Libby & Co. Events, whose team have also contributed to the Macy’s Flower Show, MGM National Harbor and high-profile events.

The world-famous McQueens boasts a client roster that’s hard to beat, supplying flowers to everyone from Harrods to Moët & Chandon.
So it stands to reason that the iconic Claridge’s has used their services since 2011, where they create Instagram-worthy centerpieces every week.
(Tip: If you want to be the first in the know, the floral team changes the displays in the wee hours on Friday mornings.)
While the creations are always jaw-dropping, they outdo themselves for holidays and events. Upcoming arrangements will be coordinated with the RHS Chelsea Flower Show in May, which is to be expected. Although how many hotel floral displays will also feature a tennis theme for Wimbledon?
There’s even a McQueens shop in the hotel — never mind if it isn’t a special occasion. Or take a one-day master class at McQueens flower school to really elevate your flower game. 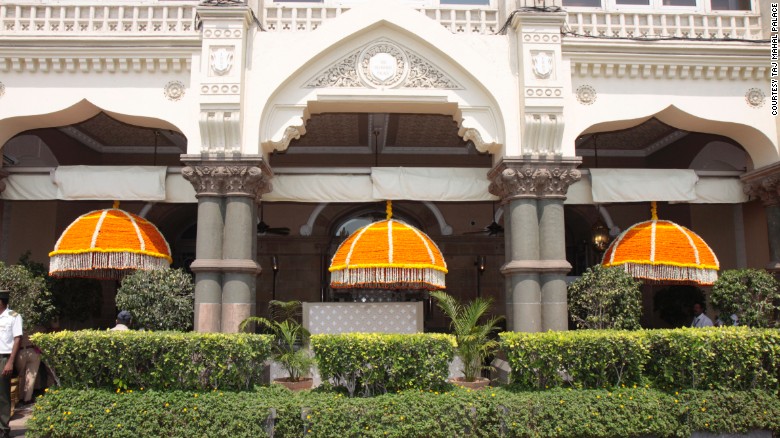 Not to be confused with the Taj Mahal mausoleum in Agra, The Taj Mahal Palace in Mumbai is an iconic five-star hotel with flowers to match.
An in-house floral team tends to all of the flowers on a daily basis and creates new displays every week–except for the lobby flowers, which are provided by an outside florist.
Besides the lobby, keep your eyes open for creative floral displays everywhere, from the restaurants to rooms. If you’re celebrating a special occasion, you just may find a heart-shaped arrangement and rose petals all over your room.
Flowers throughout are a mix of local and imported, coordinated with the seasons as well as India’s many festivals.
As an additional touch, all spa guests are welcomed with flower leis.
(Inside tip: You’ll know you’re in the company of VIPs if you spy floral umbrellas at the entrance.)

No detail is overlooked at the Dolder Grand in Zurich, an ultra-luxe hotel that’s also known for its priceless artwork. Therefore, it’s pretty much expected that this castle-like resort would boast its own floral room and in-house team to boot.
Florists go to great lengths throughout the property, which involves refreshing 20 sites every morning. Fastidious duties range from tailoring room arrangements based on the décor and feel to ensuring that there are no mixed flowers in public areas.
While the floral arrangements in the lobby are always grand, the pièce de résistance is the annual eight-foot-tall Easter egg. The 3,000-pound creation takes 24 hours and more than 12,000 carnations to execute, resulting in your childhood dreams realized.

Nashville’s Gaylord Opryland Resort stands out for devoting nine acres to indoor botanical gardens that are maintained by 20 full-time horticulturists.
Here you’ll find 50,000 tropical plants, from palm to banana trees. Of course you’ll also find Southern varieties, such as gardenias, and even a 40-foot-tall magnolia tree.
In fact, many of the plants bloom year-round, thanks in part to a climate-controlled environment and air exchange system. Leave plenty of time to explore the three separate gardens. The Garden Conservatory is the oldest, having opened in 1984, and is filled with 10,000 tropical plants. The Cascades Atrium is where you’ll find the most flowering plants, plus a waterfall.
The Delta Atrium has a more subtropical feel, along with native Southern species. Get a partial overview of the latter by riding a boat along the quarter-mile-long river.
Be sure to book a garden atrium room if you’d like to gaze at the botanicals every chance you get.

Most five-star hotels put extra effort into their floral displays, especially the lobby. But Hotel Metropole devotes an entire concept to the décor.
Dubbed Metropole Moods, the hotel has spent the past decade making and remaking the property to reflect these imaginative ideas throughout the year.
Instead of sticking to traditional flower arrangements, hotel artistic director Perrine Guyonnet, or Miss Rose as she’s commonly known, incorporates an array of items that work with her vision, whether it’s flower-filled birdcages suspended from the ceiling or a floor-to-ceiling faux wedding cake decorated with layers of flowers.
For example, the current mood is spring, represented by a full-size cherry blossom tree in the lobby.
Past moods have included Grace Kelly, Exotic Chic and Over the Rainbow.

Florist Fong Tagawa of Floral Inspirations happens to come from a background in fine arts and music, which helps to explain not just her artistic sensibility but also how she’s able to capture different emotions in her floral work at the Four Seasons Resort Oahu.
She and her team tend to design around seasonal blooms, with an emphasis on local varieties. 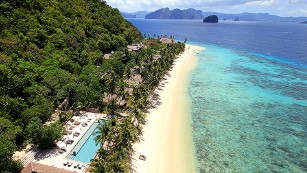 Forget being wowed by flowers and greenery in a hotel lobby. At Nanjing Green Towers, two entire buildings will possess that wow factor when they open in 2018 in the Pukou District.
Designed by Stefano Boeri Architects, the facades will be draped in about 1,100 trees and 2,500 plants and shrubs — a living building, if you will.
But this magnificent feat isn’t just for show.
As Asia’s first vertical forest (the Italian architecture firm has already constructed one in Milan), the plant life will help combat air pollution by absorbing 25 tons of carbon dioxide every year. The larger tower will house mostly office space, along with a museum and green architecture school.
A 247-room Hyatt hotel complete with rooftop pool will occupy the smaller tower, so you can experience one of the word’s only vertical forests for yourself.