Across The Web Making sense of Singapore’s hotel boom 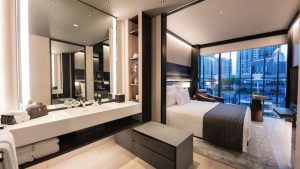 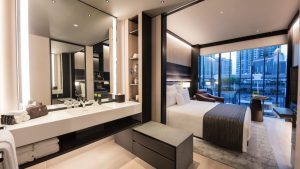 .
Singapore’s illustrious hotel history may have started with Raffles, but it took many decades for another new hotel — the Marina Bay Sands in 2010 — to capture travelers’ popular imagination in the same way.
Since then, the hotel scene in Singapore has only grown more exciting, as the city-state now ranks not only as the best place for business in Southeast Asia, but also as a compelling destination for leisure travelers to explore.
That new allure has come to a head in 2017, with a veritable explosion of new hotels coming onto the travel scene. “The last couple of years have been quite big with more than 8,000 rooms coming into the system,” says Jesper Palmqvist, area director for Asia at STR, a market data and analytics firm with offices in Singapore.
But the expansion of the market has led to a temporary glut. “The overall demand is not yet coping with the new rooms in market,” says Palmqvist, even though arrivals to Singapore have increased this year. As a result, average rates have gone down. For travelers, that translates into deals to be had on some stellar new properties.
With the number of visitors to Singapore growing, the demand should eventually catch up to supply, says Palmqvist, meaning that now is the time to pounce. With so many new hotels competing for travelers’ favor, a little parsing is in order.
The most recent crop of Singapore hotels includes a just-opened Andaz and, toward the budget end, the city’s first YOTEL. More notable openings — or in the case of Raffles, reopenings — are slated for 2018. Those hotels will join three of the year’s best new options on the Singapore hotel scene, detailed below: 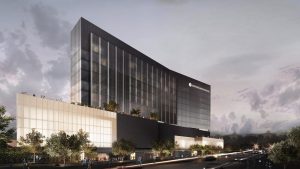 .
With its new building on the Singapore River in Robertson Quay, the InterContinental brand stays true to its business-friendly roots while also catering to a hipper, more leisure-focused guest.
That approach shows up not only in the rooms themselves, which although small are so cleverly designed that the space never feels cramped, but in the sociable vibe of the public areas as well.
The Italian restaurant, Publico, opens onto a terrace that blends seamlessly into the bustling riverfront scene beyond it — the fabulous bread here is baked on site and not to be missed.
. 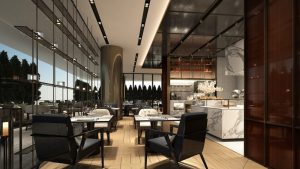 .
Further back from the river, a daytime café called Publico Deli transforms come evening into a craft cocktail bar. These feel like neighborhood spots, and it’s easy to imagine each of them becoming part of the local fabric.
.

.
In the rooms, floor-to-ceiling windows provide a dramatic backdrop for the combination seating/work/dining area, hardwood floors, slick lighting scheme, sumptuous bed and the dropdown panels hiding personal cocktail stations.
All ingredients for provided cocktail recipes, such as the vodka gimlet we assembled, are available in the minibar — it’s a great touch.
Just off the lobby, the pool, while certainly nice, feels like a bit of an afterthought compared to those of the two other hotels listed above, but everything else here is almost perfect. 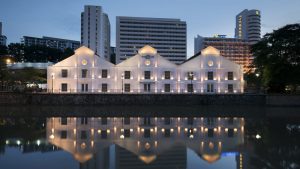 A game-changer for a Singapore hotel scene that has previously specialized in high-end chain hotels, this 37-room boutique hotel is locally owned and reimagines an 1895 spice warehouse on the Singapore River.

Throughout its history, the building also served as a distillery, an opium den and a nightclub. Its original purpose is reflected in industrial-chic design elements like the light fixtures in the soaring lobby — they echo the wheeled pulley system once used to raise spices to the ceiling.
. 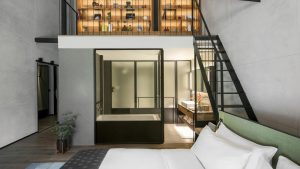 .
Fitting the rooms into an existing building’s footprint means that no two rooms at the Warehouse are the same, but all feature the same gray and gold tones, hardwood floors, Bang & Olufsen speakers, single-serve pour-over coffee in locally crafted mugs and wonderful rain showers and toiletries. Many rooms overlook the river, which makes for a hypnotic view.
. 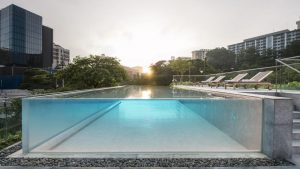 .
The infinity pool in particular is a showstopper, made entirely of glass on three sides and perched above the river on a platform adjoined to the main building.
In addition to its other merits, it’s worth noting that the Warehouse is one of the few places in Singapore to serve a decently strong cocktail. 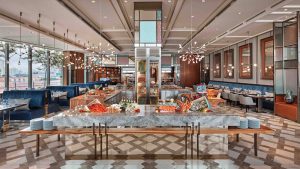 No stone has been left unturned in ensuring an elegant, frictionless stay for guests in this brand new building in the heart of Singapore’s business district, just a stone’s throw away from bustling Chinatown.

The service and attention to detail here are among the best we’ve experienced anywhere in the world.
. 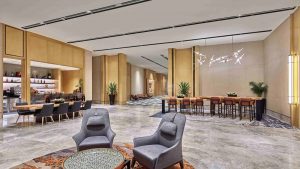 .
The 223 rooms themselves feature clean, soothing lines and textures with subtle brass accents, flattering lighting, huge bathrooms and floor-to-ceiling windows framing nearby skyscrapers, along with well appreciated details like Bose speakers, a selection of books on local topics, complimentary mobile phones, bedside USB ports and power outlets that fit US plugs.
The gloriously comfortable beds practically demand a good night’s sleep, while the large desk serves business travelers well — so well that they could conduct meetings from them if they so wished.
. 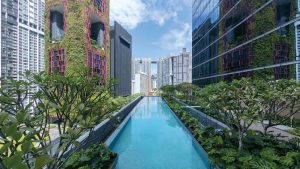 .
Other highlights of the hotel include the 100-foot-long pool — the highlight of a lush outdoor area on the hotel’s sixth floor — and Racine’s, a high-ceilinged, rather dazzling restaurant that serves two menus alongside each other — one French and one Chinese.
In the mornings, breakfasts here are a revelation. A small gym near the pool is open to all guests, while some will have access to the adjoining Virgin Active Fitness Club.
For discerning business travelers, it’s hard to imagine a better option in Singapore.