Across The Web 5 of The Best Jazz Clubs in Barcelona 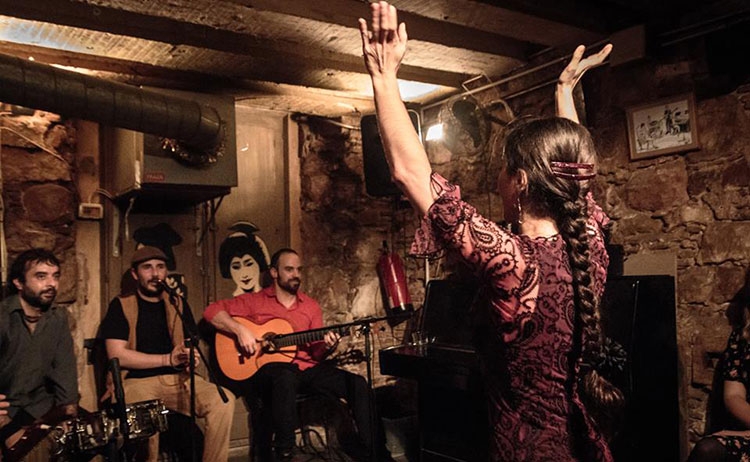 The association between Cataluña’s capital and jazz isn’t an obvious one, with visitors to the city perhaps imagining they might hear more Andalucían flamenco or gypsy-style rumba catalanabeing played live. And yet, since The Roaring Twenties, jazz has made its mark fair and square on the Catalan metropolis. Here are the best places to hear a good set, from cosy dens to more imposing edifices.

Jazz in Barcelona doesn’t come any rawer than at 23 Robadors. If your idea of a good jazz experience sees you having to ring a bell to get into a stone-walled, smoke-laced lounge, look no further than this venue which is hidden away in the labyrinth of narrow streets that is Raval. The jazz jam pure is on Wednesdays. Sundays are all about flamenco and other nights range from an eclectic mix of DJs, free jazz, bebop, even cabaret and small theater performances. There is something seven days a week. Open since 2004, it’s very local, very Catalan and there is a large mural by a local graffiti artist dominating the decor.

The Ronnie Scotts of Barcelona: Jamboree 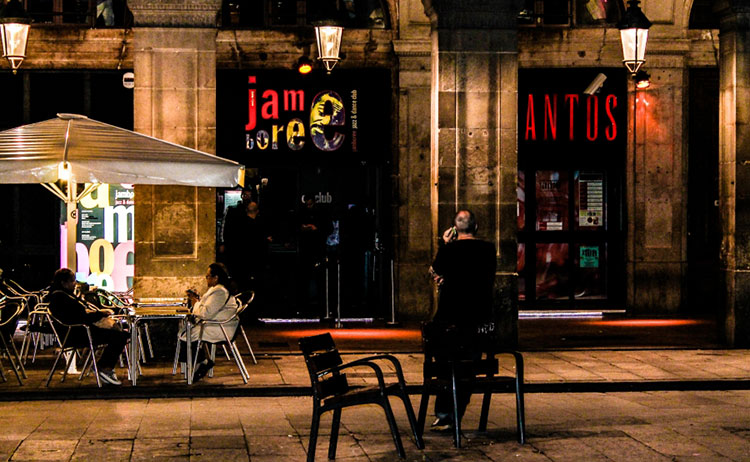 Jamboree opened in 1960 and is still Barcelona’s jazz club of reference. The atmospheric basement has long been the city’s melting point of big names: Bill Coleman, Kenny Drew and Chet Baker among them, with the latter trumpeter quoted, talking of Jamboree: “Barcelona was magnificent in December of ‘63. After Paris, it almost looked like a tropical city. I closed a deal to work for a month at a basement club that had been offering jazz music for some time.”

This most sociable of jazz clubs was named after the phrase for “tribal reunion” in Zulu, and its soul-moving sounds hide behind the serene palms and shuttered windows of Plaça Real, a square about half-way down, and just off, the Rambla with many hotels and tourist-focussed restaurants. Make sure you go downstairs when you enter Jamboree, as the upstairs is managed separately.

There is something to be heard every night of the week, twice a day and 365 days a year, whether strictly jazz, more Latin or edging towards blues. Monday nights at Jamboree deserve special recognition: the Jamboree WTF! jazz jam session sees jazz musicians strike chords with hip-hop and electronic artists. It’s a crowd puller for aspiring musicians and local spectators alike. 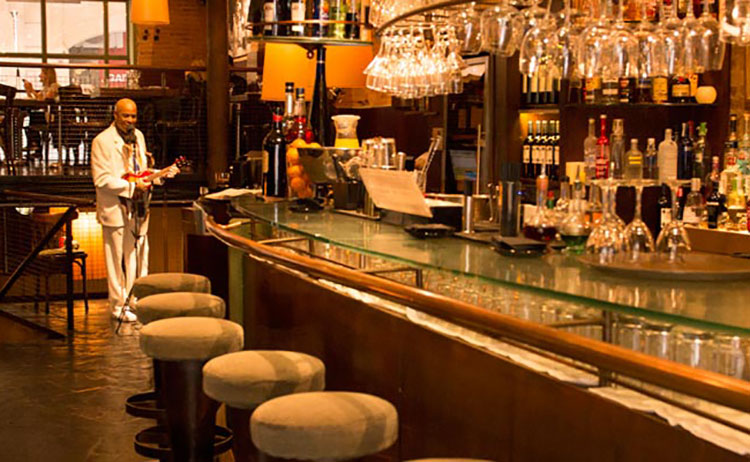 If you’d rather combine the two fine sensual experiences that are Italian food and international jazz, Little Italy is your answer, but not purely because it is Barcelona’s only restaurant with a jazz stamp on it. A few things revolutionised life in Barcelona in the 1980s; the return of democracy, preparation for the 1992 Summer Olympics and, some have claimed, the opening of this very Italian restaurant in 1988. At the time, it was unique in the area – El Born – and initially had no jazz link, focussing instead on cooking up the pappardelle.

Fast forward to 2016 and it’s adopted a sort of New York Soho character with its thrice weekly jazz dinners that now seem inseparable from its identity. They take place every Wednesday, Thursday and Sunday night from 9pm. And fear not, the trumpets never deafen such that you can’t maintain good table chat. 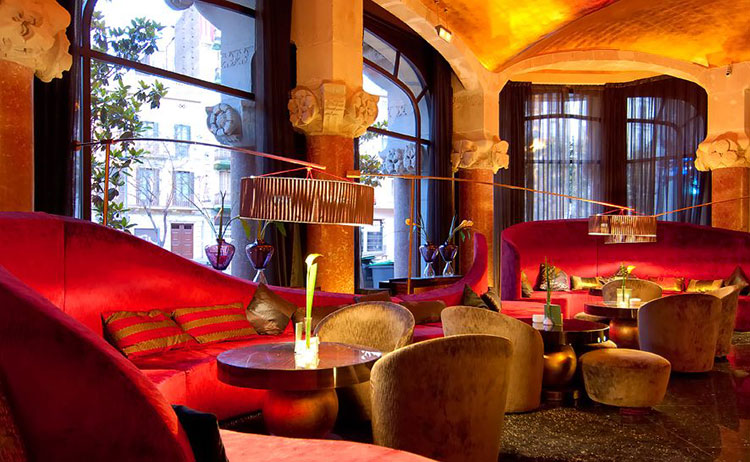 The grand modernist building housing Hotel Casa Fuster is worth a visit if only to marvel at its architectural beauty. But then a real treat is in store for those who enjoy the jazz plus decadence formula. Every Thursday night between 9pm and 11pm the hotel’s Café Vienés, renowned as a spot for intellectual gatherings since the 1930s, remolds itself into a decadent jazz club.

You can buy a jazz ticket that encompasses the Duke Ellington Menu (€100 a head), or the Louis Armstrong Tapas Menu (€65 a head). Duke Ellington’s dinner opens with “The Manhattan Minstrel” of Lobster Salad, followed by the “Live in Concert” Beef Tenderloin Steak or Baked Sea Bass, finishing with the high notes of “La Vie en Rose” which is home-baked dessert of the day, with half a bottle of Moet & Chandon.

Woody Allen has played here, as have the New Orleans Rag Trio and the Barcelona Swing Serenaders. In fact, the Allen used the stage at the majestic, modernist building to shoot a scene in his Oscar-winning film “Vicky, Cristina, Barcelona”. 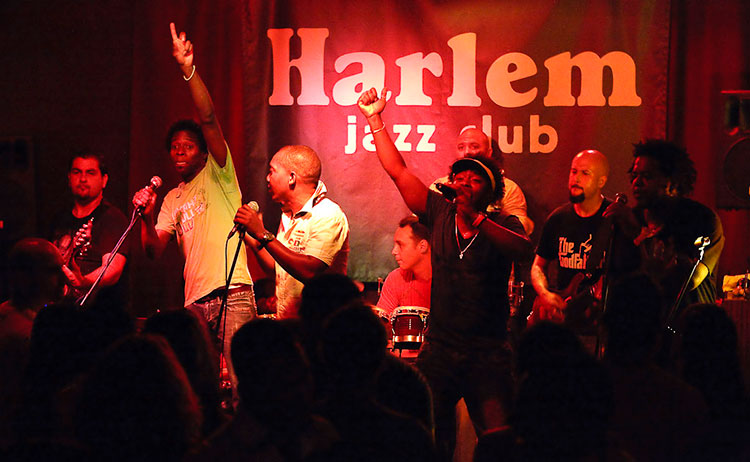 They say that Harlem Jazz Club is the oldest in Barcelona. It is also one of the least pretentious; and some of the best local talent started their musical careers in its cosy confines. A slightly older and more discerning crowd come here, and often to show their moves on the dance floor at the back if not to just have a drink at the bar. Live music is an almost daily affair and the usual order of play is for DJs to step in after the gig draws to a close, and for jazz aficionados to grace the dance floor. Expect blues, swing, Sambala (Brasilian), Cuban boleros and chachachás among the line-ups, not to mention a little gypsy jazz. This iconic club sits down a small street in the heart of the old town.